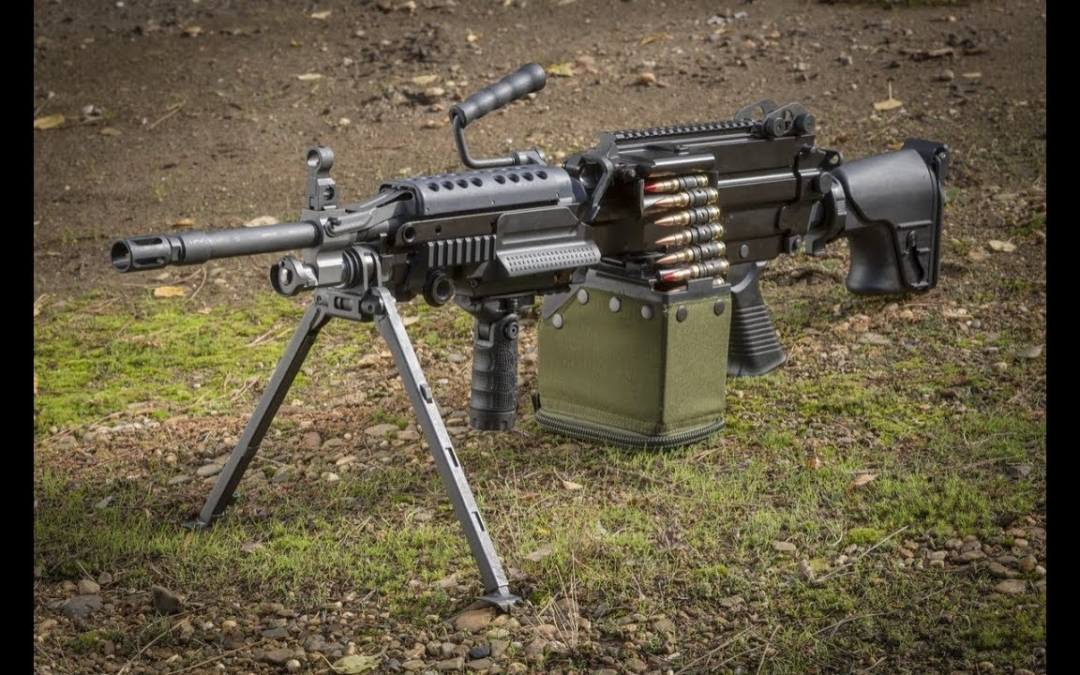 Machine guns are among the most powerful weapons that any individual human can carry and operate. Militaries around the world depend on these important guns to carry out operations, defend riflemen, and as valuable additions to armored vehicles, military planes, and even ships. They have always been popular among collectors, as well, and are a mainstay for freedom fighters, militias, and civilian fighting groups of all kinds.

We’ve taken a look at the history and development of the gun, the defining characteristics, and some world’s most popular and dependable varieties.

Quick Navigation
What Is a Machine Gun?
What Are Different Types?
Top 10 of 2018
Conclusion

What Is a Machine Gun?

The gun is technically defined as a fully automated firearm; however, not every automatic firearm is a machine gun. What makes a machine gun different from a submachine gun, an assault rifle, or an automatic pistol is its ability to provide sustained fire. Typically, this type of weapon can fire a minimum of 300 rounds in a minute.

This gun can also be understood in terms of its purpose. The primary purpose of a true machine gun is to act as a support weapon in defense of an entrenched position, to provide suppressing fire in the act of advancing, or in defense of a vehicle. They are﻿ frequently affixed to the top of fast-attack military vehicles to provide supporting fire.

While the above is the technical definition of a machine gun, United States federal law has a separate definition for the regulation and control of weapons among civilians. A “machine gun”, by Federal Law, is defined as any weapon that can fire more than one﻿ shot when the trigger is pulled. This definition covers not only weapons deliberately designed to function in this way but also any weapons modified to fire in this manner. Federal law does not prohibit civilians from owning this type of gun, ﻿but it does require that owners register their guns as Title II weapons.

The History of the Gun

Everyone from the ancient Chinese to a Revolutionary War-era Philadelphia gunsmith tried their hand at designing a revolving, repeating gun. The first true gun of the type was the Gatling gun, used by the United States Navy in the mid-1800s. This gun was the first to offer mechanical loading with controlled fire. It first saw the conflict in the Civil War, but only on a very limited scale. The original hand-cranked Gatling guns were still being used as recently as the early 20th century.

There were many iterations of self-powered, rapid-fire guns ﻿﻿over the next decades, but the first practical version was invented in 1884 and known as the Maxim machine gun. This gun used the recoil power of each spent bullet to reload the next, avoiding the necessity of reloading by hand. The Maxim ﻿also used water cooling to keep the gun from overheating. This design was used frequently in World War I.

World War II saw the development of the true prototypes of today’s guns and the first successful general-purpose guns of the type. The Browning M2 and the German-built MG 34 were particularly important designs of this era.

What Are Different Types?

In general, this type of gun can be divided into four separate categories:

LMGs are designed to be held and fired by just one soldier, who may or may not be supported by an assistant. The earliest LMGs fired full caliber ammunition, but today’s LMGs typically use a smaller cartridge to make them easier to carry. The LMG design is built around the ability to fire from the hip or on the move. Many LMGs are actually a modification of rifle designs.

There is a bit of overlap between light and medium guns, with some guns capable of functioning as a medium gun when deployed from prone or with a tripod, or as an LMG when carried by hand. In general, where LMGs are most typically fed by a cartridge, true MMGs are usually belt fed and fire high-caliber ammunition. Because machine guns can now be air-cooled instead of water-cooled, it is feasible for MMGs to function either in a fixed position or on the move.

A heavy gun is always affixed to a tripod or other mounting device and fires the largest caliber ammunition. These weapons have a superior range and penetration compared to other types of guns and can be useful, not only against enemy personnel, but also against vehicles, aircraft, and even light fortifications. The heavy machine gun really came into its own during World War II, and today many weapons of this sort are classified as auto-cannons.

GPMGs are always air cooled and can be adapted for use in light or medium roles. They frequently have a quick change barrel that can be adapted to sit on bipods, tripods, or on top of mounted vehicles. The GPMG can also be adjusted to fire different calibers of ammunition.

We’ve taken a look at 10 of the top guns of 2018 in terms of power, popularity, and ease of use. Here are the guns we rated:

The MP5K is one of the world’s most popular guns because it’s easy to carry and offers unparalleled safety and reliability for the user. The gun is also popular because of its ease of use and versatility when it comes to modifications. They are used throughout the world by many militaries and in all types of combat situations. 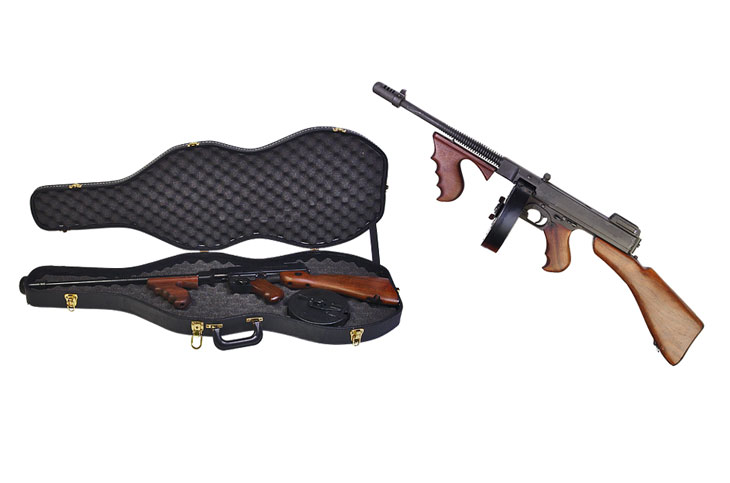 The Thompson M192 was labeled by the US Military as one of 2005’s top 10 inventions. It is both powerful and versatile. Although it only weighs 6.5 pounds, it packs an enormous punch, making it highly versatile on the field. 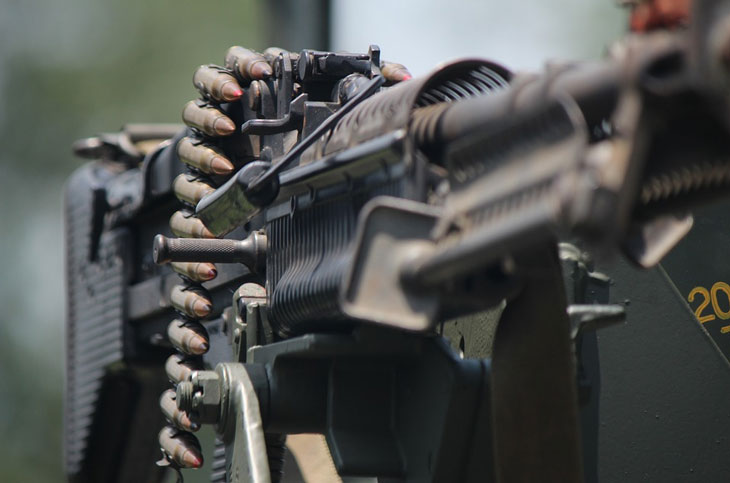 This valuable weapon first saw service in 1957. It has a short stroke gas piston and can fire between 500 and 650 rounds in a minute. Every branch of the United States military uses it because of its reliability. Although the speed of fire is slow, it is simple and easy to handle and cools quickly. Its belt system is designed so that, in theory, it never needs to stop firing. 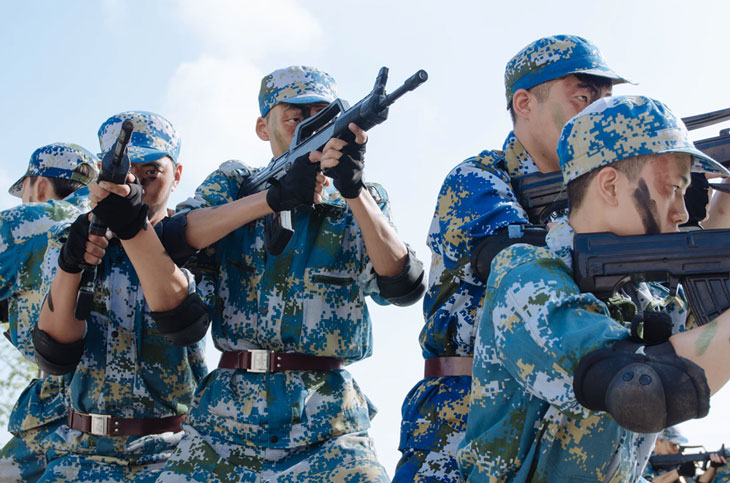 This Belgian gun comes in various models but is known for its short length and lightweight due to a unique polymer design. It fires 850 rounds a minute and is widely popular for its versatility in combat situations.

Few guns are better known worldwide than the AK-47. Popular among soldiers and civilians alike, its greatest asset is its simplicity. It can fire 600 rounds per minute and does not require any type of special knowledge or training to use. 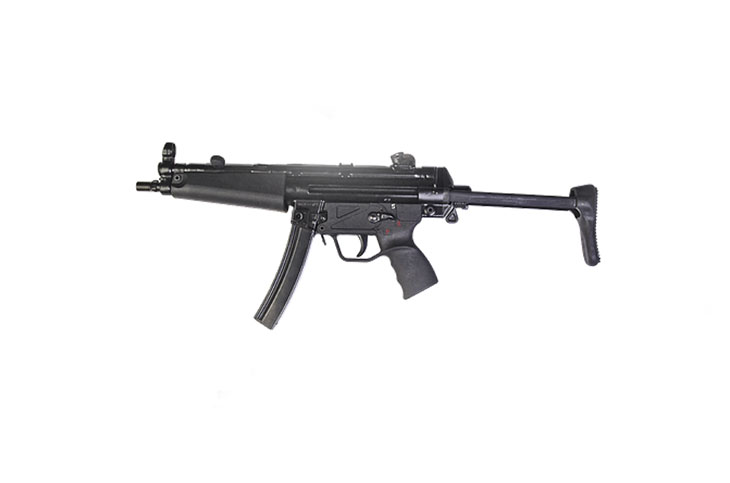 This German-made gun was invented in the early 1990s. Although it is quite heavy compared to some other models, it is still widely used as an LMG because of its thousand meter firing range, which gives it a distinct advantage on the field.

In service since 1999, this German-made gun is lightweight and short. It fires 650 rounds a minute and offers unparalleled safety to the user. Because of its lightweight versatility, it is popular with special forces. It does carry a cartridge and has a big kick, meaning that users need more time to get used to it than other LMGs.

This is a classic gun designed in 1918 and put into service in the United States in 1933. It weighs almost 84 pounds and can fire 400 to 600 rounds in a minute. It can chamber 50 BMG cartridges and is very useful against aircraft. It can be affixed to any kind of vehicle and was used extensively in World War II. It is such a valuable gun, that it continued to be used in the Iran-Iraq war, the Persian Gulf War, and other conflicts.

The Scorpion is light, easy to carry, and has a very low profile. It can be switched from full to semi-automatic and is easy to modify. It only fires 9 mm rounds, so it could almost be considered a pistol gun. However, it is very popular because of its low cost and ease of use.

This definitely qualifies as an HMG since it fires grenade shells. Developed in 2004 in the US, it weighs 50 pounds and has a range of nearly 3,500m. Gas fired with a rotating bolt, it’s certainly not mobile, but it’s definitely deadly.

The world has seen a lot of changes and a lot of different guns since Dr. Gatling first invented his hand-cranked version. The machine gun continues to be invaluable to the freedom fighter, military on the ground, and even to the world’s navies and air forces. Only time will tell what new innovations in gun design are ahead of us.