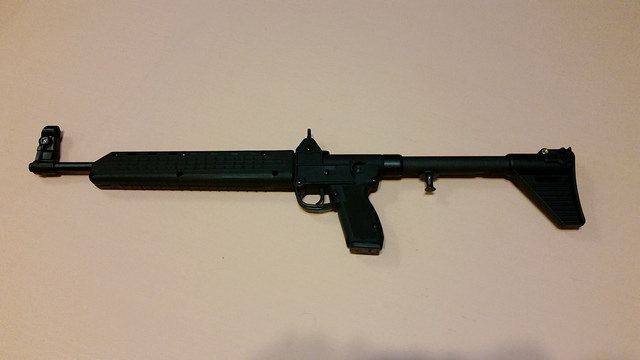 Most rifles and pistols operate with different kinds of ammunition. Long-range rifles use distinct, longer style bullets while pistols use shorter, wider looking bullets.  However, once in a while, a firearm breaks traditional mold and totally changes the game. Let us introduce the Kel Tec Sub 2000 designed by Kel-Tec CNC Industries located in Cocoa, Florida.

Quick Navigation
What Is the Kel Tec Sub 2000?
Product Specs
Pricing
How It Compares
Conclusion

The Kel Tec Sub 2000 is a carbine styled firearm that has the unique capability of firing pistol ammunition.  While most rifles only fire certain types of ammunition, this product can fire pistol rounds which gives a tactical advantage in the event you find yourself dealing with a worst-case scenario. Instead, of fumbling around for rifle rounds or having to bring two different kinds of ammunition, you can now carry the Kel Tec Sub 2000, your pistol, and one kind of ammunition.  This interchangeability definitely gives the owner a command presence in the wilderness and at the range. 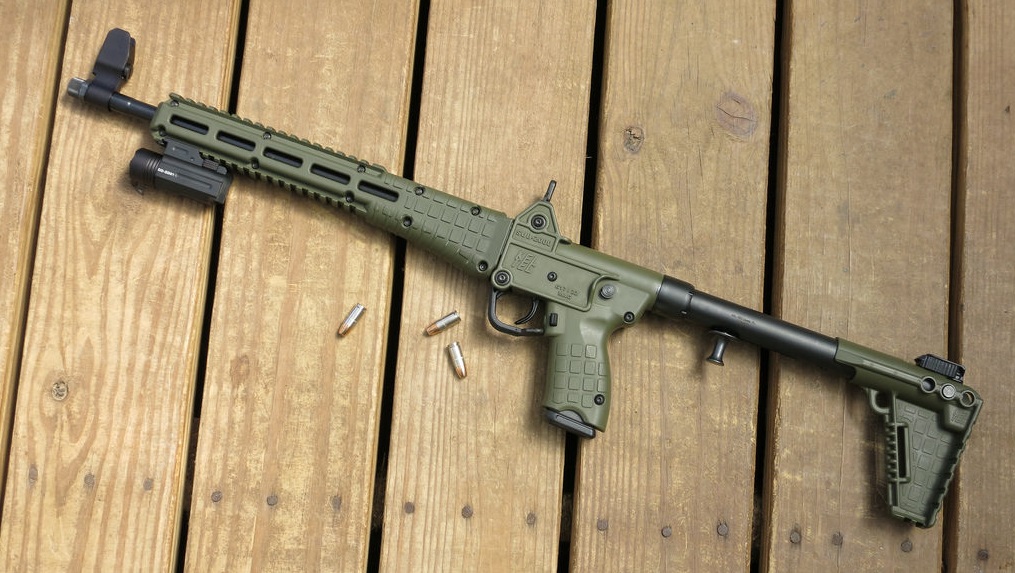 The Kel Tec Sub 2000 fires 9X19 mm Lugar and -40 caliber rounds of ammunition. The total weight of this product is just under 5 pounds making it ideal for car or backpack carry. The magazine feature for the Kel Tc Sub 2000 can carry 4 factory magazines in the market including 33 round Glock magazines. The overall length of the Kel Tec Sub 2000 is approximately 30 and a half inches. With its hinge-break feature, it can be folded reducing the length from 30 and a half inches to approximately 16 and a quarter inches in length.

We picked a couple of similar products available on the market to see how they compare. All products were researched with the same amount of scrutiny and no bias was applied.  The following reviews were completed to give you a complete picture of the carbine market and which one would best suit your needs as you shop around for the product that is right for you. The following carbine styles firearms were examined and compared against the Kel Tec Sub 2000: Thureon Defense Carbine 9mm, Norinco UZI 9mm, and the Hi Point 4095TS Carbine. 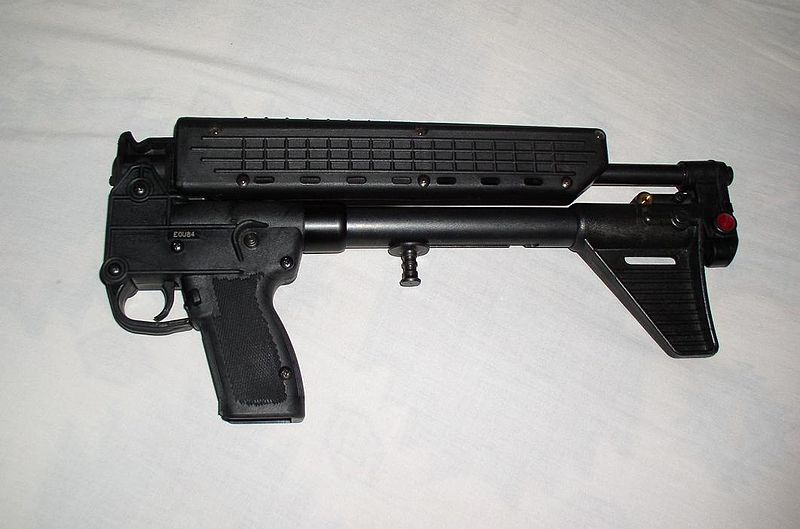 We deemed the usage of this product exceptional across the board by firearms competitors and experts. Its lightweight and small size make it optimal for fast and easy operation.

The simple design of the Kel Tec Sub 2000 makes it an easy firearm to assemble and re-assemble. It is one of the easier firearms to clean as well as attach upgraded features.

All experts and craftsmen agree that the Kel Tec Sub 2000 was definitely designed to ‘dress-to-impress.’ Its slick design and hinge-break special feature stand out in the crowd at the gun range. 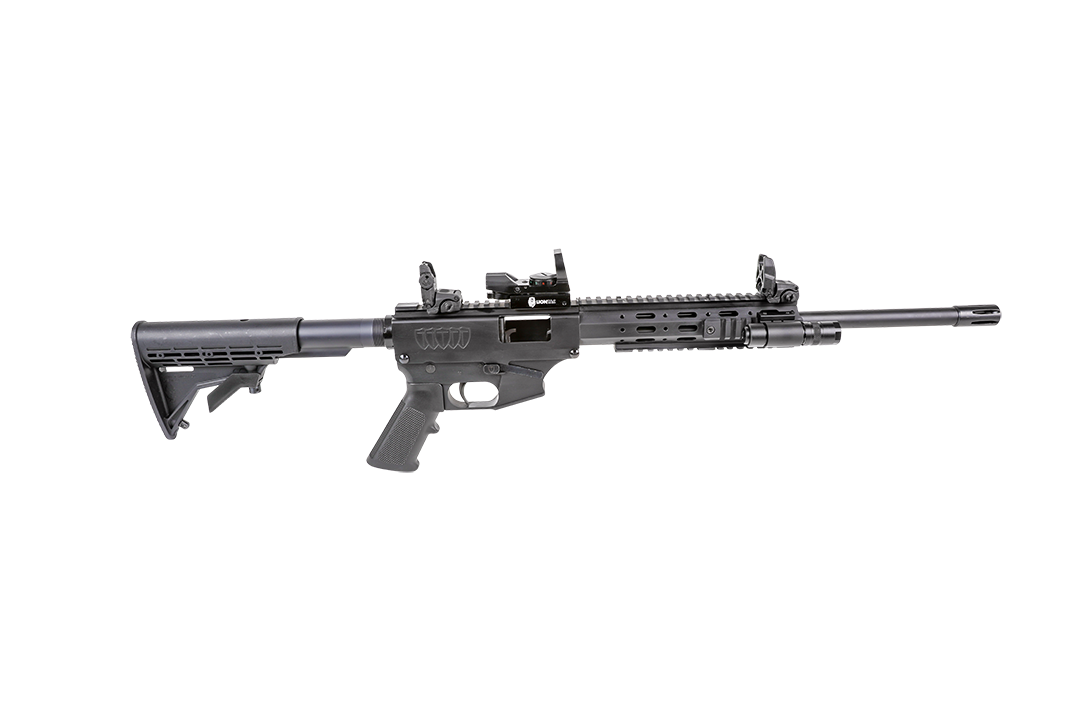 Physical handling of the firearms was reported in high marks. However, the stock of the product was a little lower than expected regarding user comfort.

Nothing too bad was reported on the Thureon Defense Carbine 9mm’s parts and assembly. Given the nature of these types of firearms and the many assembly parts, it is hard pressed to find one that will always be perfect and the fastest upon initial assembly.

The Thureon Defense Carbine 9mm was definitely designed with tactical operators in mind. Not too chic, but with the mindset of getting the job done.

No negative observations were given to the Thureon Defense Cabine 9 mm. This indicated that the aftermarket value for this product was solid and investment was encouraged regarding this product.

The Norinco UZI 9mm has been around in circulation since the early 1950s. It was originally the product of choice for the Israeli Defense Forces due to its fully automatic firing and phenomena stamina against wear-and-tear. Most militaries do not use this firearm given the advancements in weapons technologies. However, it is definitely a ‘collector’s’ item to have and the price reasonable.

The Norinco UZI 9mm has one of the best nomenclatures designed for easy operation for any operator or user. It was originally designed to be loaded and re-loaded in dark, low-light situations. This is an excellent training firearm if you need to practice your hand-to-hand coordination.

The Norinco UZI 9mm is very basic in design allowing the user to assemble and dis-assemble in record time. It also has a hinge-break feature allowing to fold in half and for faster disassembly.

This product’s design is timeless. Often purchased for the recollection of certain historic events, the Norinco UZI 9mm was deemed to be a must have based on looks alone.

The Norinco UZI 9mm is stylish in design but does not have a high aftermarket value in the present firearms trade industry. Although the low purchase is quite appealing, there is a reason why this is true for this product. If you want a product that is excellent in usage and stylishness, then the Norinco UZI 9mm is the way to go. However, if you want to maintain financial security after buying it and selling it, we would not encourage this particular firearm.

The Hi Point 409 5TS Carbine is another firearm to look at when considering the purchase of a carbine. It fired .380 ACP, 9X19 mm, .40 Smith & Wesson, and .45 ACP rounds of ammunition. Total weight of this product is just over 6 pounds which can also be a solid convenience if you are carrying this firearm camping or on a long distance in the firing range depending what you are training for.

The Hi Point 4095TS is a durable, inexpensive carbine firearm that with a barrel length of approximately 17.5 inches with a total length of approximately 32 inches. The total weight of this product is around 7 pounds with fully adjustable sights. The Hi Point 4095TS has a 10-shot capacity and is all-weather durability making it highly cost-effective.

Nothing negative was reported when examination of the Hi Point 4095TS Carbine was completed. The firearm has basic stock, barrel, and nomenclature features like most firearms do.

The assembly for this product is very basic and also comes with several upgrades specifically made for this product. There were no complaints of lengthy assembly time when the Hi Point 4095TS Carbine was put to the test.

The Hi Point 4095TS Carbine was designed with utility versus flash. We found it to be slightly bulky with not a lot of fancy stock options that the other carbines came with.

The warranty for this product was found to be phenomenal. Per the manufacturer, all Hi Point 4095TS firearms come with a lifetime guarantee warranty. This means that whether you purchase the Hi Point 4095TS Carbine or any other firearms from Hi Point, you automatically get a free lifetime warranty! This feature alone is worth giving the Hi Point 4095TS a second look if you are seriously thinking about buying a carbine styled firearm.

Based upon all the factors presented in this article, our final decision goes to the Kel Tec Sub 2000. The ease of operation, the surprisingly lightweight nomenclature, the ability to reduce size in half, and precision accuracy for its firepower make it one of the best firearms to have. It was also observed to have one of the highest after-market values due to its design and the ability for phenomenal upgrade potential. The Kel Tec Sub 2000 had an amazing unique nomenclature that allowed it to be deployed almost anywhere the user would need it.

Although the initially tested shot patterns of the firearms were slightly off, the available upgrades for it allowed it to be a spot-on product from both medium to long-range distances. The Thureon Defense Carbine 9 mm was observed to be the best choice for those individuals seeking to maintain their marksman status. This product's stock flash suppressor also allowed for less recoil upon firing.

The Norinco UZI 9mm was also able to be hinge-broke for ideal storage and rapid deployment in almost any theater. However, its accuracy was not too up to par as it was originally designed to put the most rounds down range as possible in front-line scenarios. If you want classic design, this would be the product to buy. The Hi Point 4095TS Carbine was observed to be the most durable of the firearms researched. It has the highest caliber of warranty one can get with any product: lifetime guarantee. The accuracy of this firearm held its ground against the Kel Tec Sub 2000.

However, the Hi Point 4095TS's design was very bland and basic at best. Firearms experts were not too impressed with the product's appearance. All in all, the Kel Tec Sub 2000 was still observed to be the best buy in all comparisons whether for looks, accuracy, or pricing. This product has it all. If you are looking for a firearm that literally has that ‘all-in-one’ packaged deal, then the Kel Tec Sub 2000 is the one for you.