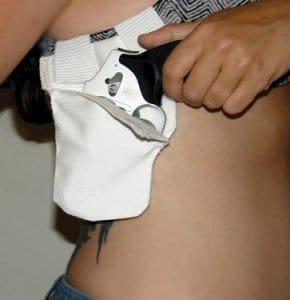 Since the beginning of time, or when man decided to carry a firearm on his side, gun holsters have been one of the most important factors once a person has decided to carry one. It is an integral piece of equipment that is as important as the firearm itself. What good is the gun if you can’t get to it, or can’t get it out?

Early on when guns were a part of everyday life, used for hunting dinner and for personal security, they were worn exposed on the hip on a daily basis. They were utilitarian, made to do the job of securing the firearm, but allowing quick access to it as well. They were made as part of a belt that was worn outside of the normal pant belt and sat lower on the hip. The bottom or barrel end anchored to the thigh by means of a leather strap that tied around the thigh to keep the holster and gun from “flopping” up and down while walking or riding your trusted steed. The strap also anchored the holster so when the firearm was drawn it did not lift when pulled on allowing the gun to be drawn from the holster very efficiently. Most of these gun belts and holsters were made by a local saddle maker or tack maker as they were the “go to” guys back in the day for leather made goods.

Today there are many holster manufacturers, making so many different models of holsters that it is close to impossible to list them all. Most all of the thousands of holsters offered today are based upon 3 basic forms;

Holsters are made out of every material known to man today. The most traditional being leather, and many being made from space age polymers molded to the exact form of the gun model that you carry. 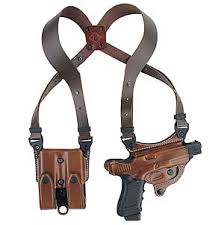 The shoulder holster can seem daunting at first, a mishmash of straps, belt buckles, holster and attachable doodads at first glance, but, they are one of the most comfortable holsters to carry with. They are easily concealable under a light jacket or even an unbuttoned shirt and with practice is a very quick and reliable concealment holster. The drawback, if there is one, is that they can be costly. There are different models offered today, mostly mounting the holster to the straps at different angles, from horizontal with the grip facing forward, all the way to and including vertical with the grip facing up under the armpit.

GALCO makes a fine quality shoulder rig out of leather and is reasonably priced in the $130.00 range. Their leather is soft and flexible yet doesn’t seem to show signs of any appreciable wear after daily use for months and months. Galco Gun Holster has been in business since 1969 and continues today as one of the largest makers of holsters in the world today. They are American made and supported our troops during the Middle East conflicts, supplying donated holsters to our deploying soldiers until 2012. 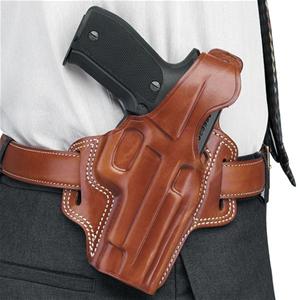 The shoulder holster rig is a cross over carry system that fits not only men, but women as well serving to keep your firearm as concealed as it can be while allowing fashion to be first and foremost in your daily choices.

On the more expensive end of the spectrum of shoulder holsters lie DeSantis and Alessi rigs. Both companies make not only their shoulder holsters, but all of their holsters like fine pieces of furniture. Both of these companies’ shoulder holsters can be worn for long periods of time without creating fatigue or any feeling of discomfort from the rig. This is especially important if you are carrying a larger caliber firearm that has some weight to it.

My Alessi shoulder rig is so comfortable that I can easily forget I am wearing it…if that is possible.

For women the comfort of a shoulder rig as well as it’s ability to fit in with today’s fashion makes it one of our top choices for women’s concealed carry today.

The belt holster is probably one of the most used types of firearm holster when compared to all others. It is mobile and portable, meaning it can be moved from belt to belt and is not permanently attached to one belt as the gun belt holster was. I own many different types of belt holsters, inside the waistband that affords a bit better concealment, but, is near impossible to re holster your firearm into, to a hand made outside the belt holster that is fitted perfectly to every line of my firearm. Alessi and DeSantis are masters of custom holsters along these lines.

Today belt holsters are available in polymer plastics form fitted to your specific firearm. I have several of these, but find them uncomfortable at times due to the hard plastic edges cutting into my side when moving throughout the day. Nylon and it’s various forms are used by many manufactures and provide long term “beat it up” use without showing much wear. They are impervious to weather and will last a long time without giving them a thought about oiling like a leather rig. Blackhawk Holsters use many of these plastics and nylons in their line of holsters, touting their indestructibility during heavy use.

The ankle holster is a strange form of carry that is usually reserved for a back up piece or gun to your main carry firearm. They were prevalent with Law Enforcement for years as they are exposed to the criminal element with their main firearm exposed throughout their daily work. They do not afford easy access, nor can they be considered quick to draw from. I would not recommend one as a main concealed carry holster. They do afford a secondary means of protection if you are forced to the ground and cannot draw your primary weapon from concealment. Practice is imperative if you are going to attempt to carry your firearm in this holster.

As more and more women learn that “when seconds count, the police are only minutes away”, the market has begun to respond to the unique needs of them concealed carrying. It began with a purse made with a pouch or compartment separate from the rest of the purse to carry your firearm. WHAT A BLUNDER on so many levels! I’ve decided that it was designed and made by a man who had never spoken with a woman, or a woman who has had her purse stolen! Never, Never, NEVER carry your concealed firearm in your purse! It IS the target of thieves. Snatch and grab…remember? If the thief grabs your purse and runs he’s got your firearm. Not to mention the recent tragedy of a child shooting his mother because she left her purse in the shopping cart with her child and he retrieved the firearm from Mommy’s purse and inadvertently shot her in a store. BAD CHOICE! Let’s leave it at that.

Today there are people in this world that are beginning to think the unique needs of women through! There are some very good ideas and some not so good. Waistband carry compression belts are made that hold your firearm securely to your tummy. To draw the firearm all you need to do is lift your shirt. Nothing more that the move I as a man make when drawing from under a T shirt. 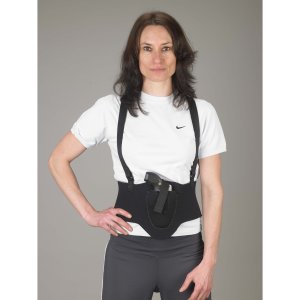 A not so good idea is a compression type belt that is worn over your underwear below the button line of your pants. Thought was put into this as one can tell by the picture below that the inventor had considered the low riding pants that are fashionable today. It is designed to be worn VERY low, so LOW that you actually have to unbutton your pants to retrieve the firearm. What a surprise for your attacker!  “Hang on”….let me undo my britches for ya”….. Ya, not so much!

Side of bra or center of bra add on holsters are gaining popularity. They work utilizing your existing undergarments, Velcro-ing the holster to them. The side or underarm style that utilizes the side of the bra strap very much resembles a shoulder holster making it an easy jump from a standard rig to a very personalized “rig”. There may be a drawback to this rig as it may prove to be awfully high to draw from. I would be really interested to hear from one of our readers if they have had any experience using this set up.

The center of bra holster is made under the same idea of utilizing your own undergarments to carry your firearm.  The holster is again attached with Velcro to the front strap of your bra between the cups. Drawing the firearm is accomplished by pulling the butt of the firearm downwards, the direction one would want to pull the firearm from concealment anyway, so it seems to be well thought out. The only drawback to either of these systems that I can think of is that if you are carrying a large caliber, heavy firearm and you are built of a lighter caliber shall we say…it may cause a sagging or drooping issue that may become a problem.

Practice as always is of tantamount importance when integrating a new holster to your daily routine. Dry fore practice every day with your new rig until it becomes like riding a bike, then practice some more, because you just don’t know when……

So whether a Galco or a Blackhawk, an Alessi or a DeSantis remember that your holster is as important as the firearm you carry!

What is your favorite carry holster? Let us know!