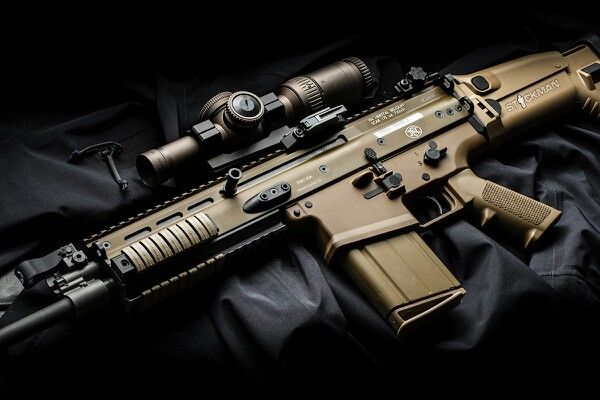 Want to feel like you’re part of the troops? The FN Scar 17S is the solution for you. To save you from a small shock, we’re going to mention the price of this perfect weapon at the end of this review. Up until then, we’ll have to talk about the history of this military gun, how the FN Scar 17S came to be known as one of the most powerful rifles ever to be used in actual combat.

History of the FN Scar 17S

You might be wondering whether the Scar is just a name they decided on because of its mean looks, or whether it actually stands for something. Well, it does. Its official name is the Special Operations Forces Combat Assault Rifle. The long title stands for the fact that FN made it by order of SOCOM or the US Special Ops. Command, which subsequently used it for their ground troops.

As of 2016, this rifle has been used in three major wars (the Iraqi War, Afghanistan War, and the Central African Republic armed conflict). Apart from these three armed incursions, the FN Scar 17S is being used in about 20 countries for various operations by law enforcement, military, or navy personnel.

Right after their launch, the FN Scar 17S and 16S proved themselves against the classic M4 Carabine and the M16 rifle in a test conducted at the Aberdeen proving grounds. While the M4 suffered about 882 stoppages, the Scar only went through 226. If you think that’s a lot, it isn’t. Consider that for the Scar, most of the stoppages were caused by faulty cartridges, while for the M4, about half were produced by poor lubrication levels.

Specs of the FN Scar 17S

As you’ve probably gathered by now, the FNH Scar 17S is no ordinary rifle. It’s a versatile semi-automatic gun with a firepower that can literally tear pieces of concrete to shreds. Here’s a full list of the specs of the FN Scar 17S:

We should also mention the FN Scar 20, which is nothing but an enhanced FNH Scar 17S. The Scar 20 features a 20” barrel length, a longer receiver, and a mounted scope that transform it into a very effective sniper rifle. By reducing the recoil and improving the accuracy, this rifle essentially becomes as good as any sniper rifle, provided you’re not shooting from 1,000 yards away. The FN Scar 20 also features an optional 2-stage trigger that can also greatly improve precision.

How Does the FN Scar 17S Gas Piston Work?

While many people acknowledge the gas piston as being a revolutionary improvement on all rifles, nobody knows exactly how it works its magic. Here’s a short explanation:

On the FN Scar 17S it works like this: when the bullet is fired, a small amount of the gasses in the combustion go back through the rifle and push a piston that reloads the gun. The advantage that this rifle has over the system of other rifles is that any excess gas is evacuated discretely instead of building up in the rifle. This keeps it from overheating and considerably reducing recoil at the same time.

Think this is ingenious? So do we!

The FN Scar 17S is a beautiful and powerful weapon. It can easily tear through any wall that’s not too thick. It can smash concrete, break ice into little shreds, and all that with minimal recoil while boasting sights of $2,000 or more. Remember we said we’d tell you about the price? Well, if you want to buy an FN Scar 17S, you need to save about $3,000 dollars.

So what do you like about the Scar 17S? Is it its raw power? Its sheer capability for destruction? Or the fact that it’s used by some of the coolest troops in the US military, the Spec Ops. Have your say in the comments!