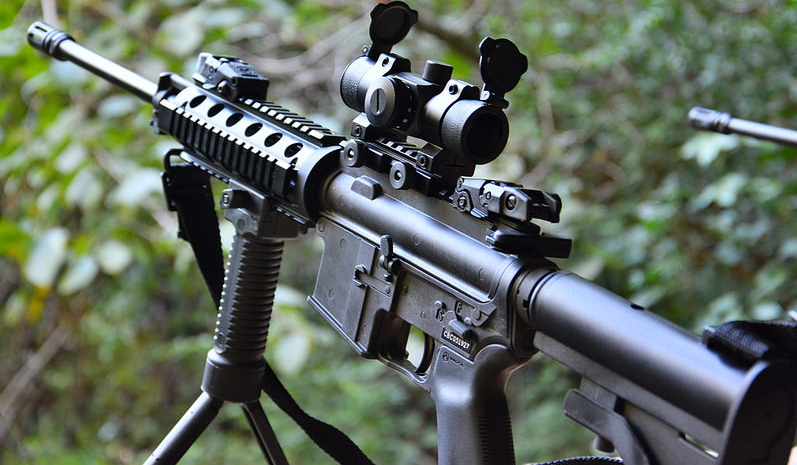 As firearms go, there are few rifles as recognizable as the iconic AR 15 rifle. While many other weapons have come and gone, this rifle has been one of the very few weapons that has dramatically grown in popularity over the decades. And today, it is now one of the most popular firearms on the market. However, with so many competing brands, designs and manufacturers it can be a daunting task when trying to figure out which rifle you should buy. Here in this list we have selected four AR 15 style rifles that we think might interest you.

Quick Navigation
What Is the AR 15 Rifle?
Product Specs
Pricing
How It Compares
Conclusion

The AR 15 rifle was first conceived of by the firearms company ArmaLite in the mid-1950s as a lightweight and modular assault rifle. Eventually, the company would go on to sell the design and trademark to Colt, who produced the rifle in spades. Over the decades since, the rifle has grown dramatically in popularity, and today the rifle is made by a wide variety of manufacturers. Today, AR-15s are classified as modern sporting rifles by both firearms trade associations and manufacturers alike.

At its core, the AR-15 is a lightweight semi-automatic rifle chambered in either .223 Remington or 5.56mm NATO. One of the rifle's distinct features is its two-part receiver assembly, which enhances the modularity of the weapon to accommodate a wide variety of attachments.

The only thing that the incredible variety of AR-15s quite possibly have in common would be their lower receiver: AR-15s are most often chambered in either the ubiquitous .223 Remington or its sister cartridge, the 5.56mm NATO. Although it's not unheard of for other, similarly sized cartridges to be used on the AR platform, such as the .300 Blackout cartridge. From here on out, keep in mind that the lower receiver is the portion considered a firearm by United States law.

With that said, most versions of the AR 15 rifle share common design characteristics, and the upper receiver usually has a variety of features. Picatinny rails are a common sight on newer ARs, as are features like collapsible buttstocks. The upper receiver may also have such features as an ejector port cover or button assist. The lower receiver can mount different buttstocks or grips, ranging from collapsible skeletal stocks to classic M16-style buttstocks.

Barrels and magazines can also come in many shapes, sizes, and types. It is common to see everything from Tax Stamp-requiring short barrels to the more conventional longer barrels. Magazines come in both metal and polymer, and with capacities ranging from just a few rounds into the hundreds. Barrel shrouds are another feature worth mentioning, with Picatinny rails adorning every conceivable surface a common sight. And depending on the choice of a barrel, the rifle in question might fit flash hiders, recoil compensators, or even a bayonet.

It's a great time to buy an AR 15 rifle, no matter the style or manufacturer. While the price for an AR-style rifle has often ranged depending on an even wider array of factors, it's entirely possible to purchase an AR-15 for as little as $$, depending on the make, model, and brand. Alternatively, if you are looking for extra features and are willing to splurge, then the market is very much more wide open for you.

We picked a few similar products available on the market to see how they compare:

On the expensive side. You can purchase a Ruger SR-556 Takedown for around $$$.

The SR-556 is a very comfortable rifle to hold. The handgrip and butt-stock are Magpul MOE-branded and comfortable to interact with. The buttstock can be extended by depressing a lever beneath the cheek rest, allowing the user to either extend or retract the stock at will. The handguard features both Picatinny and KeyMod rails, enabling the attachment of a wide variety of optics and accessories if you wish to replace the pop-up iron sights with an alternative. The Magpul-branded polymer magazines are also comfortable and easy to load and fits snugly into the magazine well.

The SR-556 can be fairly quickly broken down into its upper receiver and handguard, lower receiver and stock, and its barrel. It also comes with a convenient Ruger-branded carry case, allowing for ease of transportation and storage.

Overall, the SR-556 has a solid design, and both the upper and lower receivers feel well built. The is barrel is cold hammer-forged and made from chrome-moly vanadium steel to ensure accuracy and longevity. In addition, a button enables the user to clear any jams quickly and handle any mechanical mishaps they may encounter during use.

Technically yes. While Ruger rarely offers a warranty service in the classical sense, they will replace broken or damaged parts free and without question. 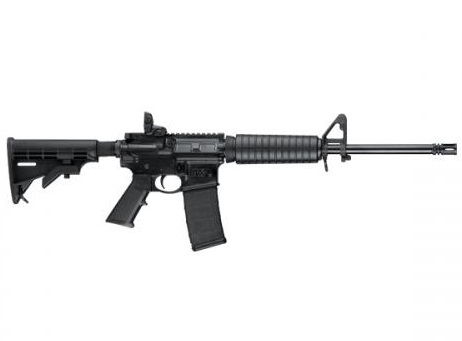 Smith & Wesson's offering on this list is excellent: the M&P Sport II. It is definitely unique. The first thing that might draw your eye is the Armornite finish and the classic adjustable A2 front sight on the barrel. The matte black finish also extends to the aluminum body of the rifle. Overall, the Sport II is the AR-15 distilled; it was easy to pick up, but hard to put down.

As described above, the M&P Sport II is the AR-15, simplified and distilled into its most basic form. While it lacks the bells and whistles of some other offerings on this list, it does its job and does it well. While the classic round handguard is typical and common of AR 15 rifles, it is comfortable to hold.

Like most if not all AR 15 rifles, the M&P Sport II can be broken down into its upper and lower portions by extracting the two pins at the front and rear of the receiver. This allows the rifle to fit inside any typical carry case with ease.

While this AR 15 rifle doesn't have many extravagant bells and whistles, it is overall a solid weapon. The Magpul-branded rear flip-up sight nicely complements the more classic A2 forward sight. Likewise, the adjustable butt-stock is simple in its form and function.

All products purchased through Smith & Wesson automatically come with a lifetime service guarantee.

If I could use one word to describe this AR 15 rifle, it would be "throwback." The classic AR15A4 bears a strong resemblance to the M16A2, one of the old mainstays of the U.S. Army and the Marine Corps. At a glance, a layman might find it very hard to distinguish the two rifles apart. One feature that sets the two apart is the AR15A4's detachable carry handle, mounted on a Picatinny rail above the receiver, and the absence of a burst-fire mode.

Overall, the Colt AR15A4 is dead simple to use. If you're familiar with the operation of other more modern ARs, then you'll be right at home with this rifle's classic and straightforward design. While a tad bit heavier than other rifles, it is still comfortable and simple to aim and fire.

Like most other AR platforms, the AR15A4 can be broken down into its upper and lower portions by extracting the two pins at the front and rear of the receiver. This allows the rifle to fit inside any typical carry case with ease.

The AR15A4 is a simple, solidly built automatic rifle. Even though it's a little on the bulky side, it makes up for it with its effective design. The matte black finish and chromed barrel help protect the rifle's critical components from corrosion and the elements, while the carry handle can be detached to allow for the mounting of optics on the Picatinny rail beneath.

Colt offers a 1-year warranty for rifles purchased through them.

The final AR rifle on this list is the M4V1, which is built with a Cold Hammer Forged 16” M4 Profile barrel with a Carbine gas system. It comes installed with Daniel Defense's proprietary front sight base which is precision CNC-machined from a solid billet of 4140 steel. Both the upper and lower receiver are machined from 7075-T6 Aluminum.

This rifle features several notable design elements including an incorporated flash suppressor, a vertical grip mounted beneath the barrel, and a handguard fitted with multiple Picatinny rails for enhanced customization. Cosmetically, the rifle is beautiful, with the buttstock, forward grip, pistol grip, and handguard that are all coated with a super soft over-molting that shares the same distinct pattern.

The price of the Daniel Defense M4V1 ranges from Approximately $$$.

Overall, the DDM4V1 is a very straightforward-use AR 15 rifle. The rear sight is mounted on the Picatinny rail above the receiver, and it was simple to adjust. The buttstock could also be retracted and extended as needed, allowing the weapon to be comfortably used by just about anybody. There are also quick disconnect attachment points integrated to the front and back on both sides of the hand guard's lower rail for fully ambidextrous sling attachment.

Another ambidextrous feature of the rifle is the fire selector, which can be toggled from safe to fire from either side of the receiver. Molded panels are attached to the Picatinny rails around the hand guard, making the rifle comfortable to hold from there.

Like most other AR platforms, the DDM4V1 is able to be broken down into its upper and lower portions by extracting the two pins at the front and rear of the receiver. This allows the rifle to fit inside any typical carry case with ease.

Overall, the DDM4V1 is a very solidly built rifle. The receiver is made from aluminium, and the magazine sits snugly in the magazine well. The gap between the upper and lower receivers as almost nonexistent, meaning both were made. The bolt carrier group is Mil-Spec, and much of the internal components are machined from stainless steel.

Daniel Defense offers a 100% lifetime warranty, not just for the DDM4V1 but for all products sold by Daniel Defense. 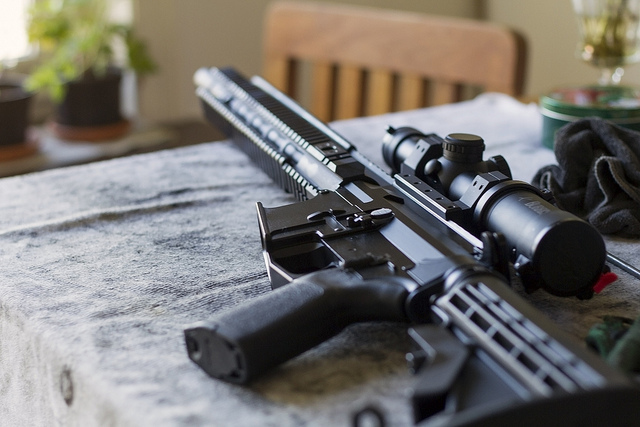 In conclusion, it's important to remember that what one person considers to be the best AR 15 rifle may not be the same for someone else, as the choice is entirely subjective depending on your tastes and intended purpose for the rifle. Some people shopping for AR 15 rifles are just looking for a good deal or something that won't break their budget while others will spend extra money on special features or high-quality craftsmanship. We hope this list has been helpful as you decide which AR 15 rifle to buy, but reach out to your local gun stores to learn more - that's where the real experts work!