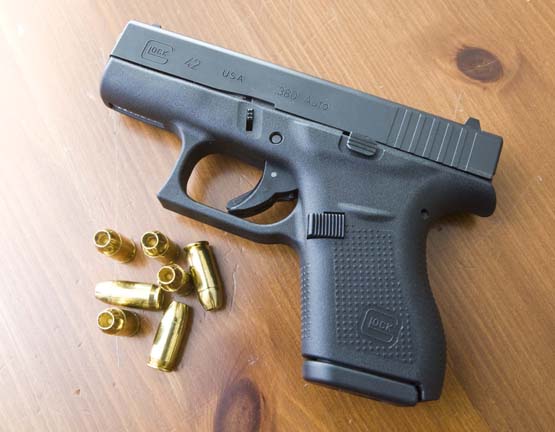 If you're looking for a safe, small, and accurate handgun, then the Glock 42 is the sidearm for you. This pistol offers all the features that customers expect from Glock, including their proven reliability and durability. Balancing comfort, customization, and accuracy, the Glock 42 has it all. If you are a fresh or old Glock customer looking for a new light and accurate defensive sidearm, this gun is the one for you.

Quick Navigation
What Is the Glock 42?
Similar Products
The M&P Bodyguard
The Ruger LC380
Sig Sauer P238
Is This Pistol Right For Me?
Performance & Reviews
10 Reasons to Buy a Glock 42
Conclusion

The G42 is the smallest handgun offered by Glock, weighing only .86lbs with an empty magazine that holds up to 6 bullets (+1 in the chamber). The gun fires .380 caliber bullets from a 3.25-inch barrel with precision and low-recoil. The trigger takes 8.5lbs to pull,  and this sidearm features the Glock white “cub and ball” style sights and is a striker-fired single-action weapon. It features a two-piece trigger safety and comes with two magazines upon purchase.

The market price of the gun can be anywhere from $350 up to $480, depending on availability, specifics, and the individual seller. The price point puts it in the average range for a pistol of its caliber and also allows it to be widely available at almost any gun store.

For avid gun lovers, reviewers suggest they try out the .380 caliber gun before writing it off for not being a 9mm. Gun professionals and reviewers got over their initial skepticism after spending time on the range with the Glock 42 as its ease of use and consistency is something that any gun user can appreciate.

There are several similar products to the Glock 42 on the market offered by other gun makers, including the M&P Bodyguard from Smith and Wesson, Ruger’s LC380, and the P238 from Sig Sauer. All of them use polymer frames and steel slides, have 6 round magazines and shoot the .380 round. These guns represent the best subcompacts that the various manufacturers believe they can produce and all have different specifications.

This gun from Smith and Wesson weighs a little less than the G42 and is slightly shorter. However, the drawback of its smaller size is that the recoil is more noticeable and causes the shooter to lose accuracy when quickly firing an entire clip. Professionals find that the G42 is more reliable in landing consecutive shots due to its lower recoil at the cost of being slightly longer and heavier.

This is probably the closest thing to the Glock 42 on the market in terms of size (it is barely larger) and costs about $ less. However, the drop in cost comes with a considerable downturn in performance as it has a long double action trigger that makes it harder to master compared to the much more intuitive and smooth G42.

Another comparable weapon is the Sig Sauer P238. While it might feel slightly better than the Glock, market price starts above $$ making it fairly unattainable for the average gun enthusiast. However, some people who have tested the P238 have also found that it is too small for someone with an average to a large hand to use comfortably and easily, making the cheaper Glock look more appealing than the much more expensive Sig Sauer to people who may value comfort over pure performance. The simplicity of the Glock makes sense for a gun of its size.

Is This Pistol Right For Me?

The Glock 42 is a great pistol for both new and experienced shooters. Because it has lower recoil (especially compared to 9mm), newer shooters will appreciate not getting their hands battered while more experienced users will hit their markdown range with more consistency. The easy to use two-piece trigger safety and striker-fired single action weapon is easier for lesser experienced gun owners in a time of trouble because there is less hassle to fire, while to an experienced gun user, the action will be purely reflexive with no long, double action trigger or manual safety to get in the way.

The price of this pistol is another feature that may make it more attractive to a casual or an inexperienced gun owner. At prices as low as $$, the weapon is not only affordable but also widely available. Almost any gun store should have one in stock, and for many, it is the first one they suggest when looking for an easy to use, easy to conceal sidearm. Because of its popularity, many customizations are also available.

Benefits the Glock 42 has compared to other .38s: 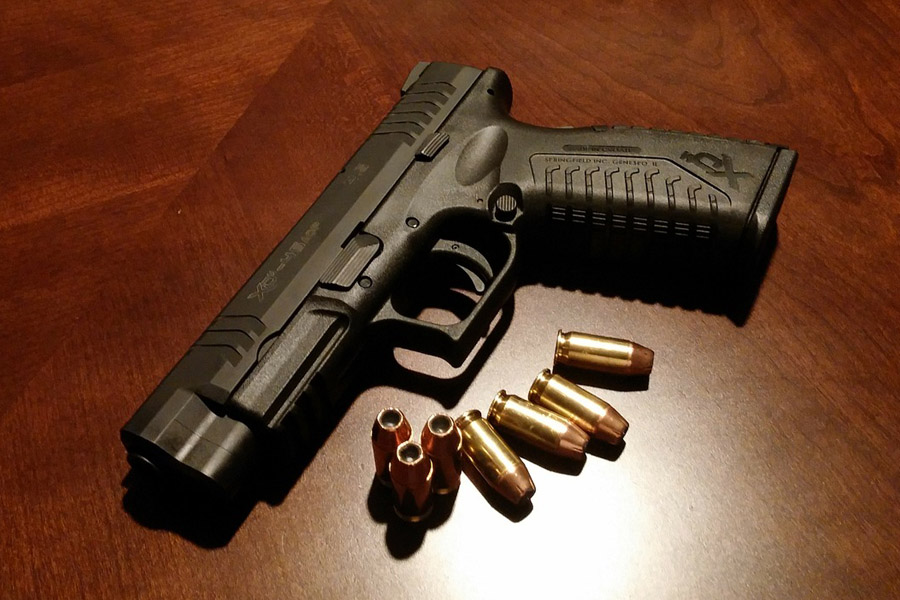 The Glock 42 has been tested and reviewed many times since its release in 2014, so there is a lot of feedback and test results to inform you of its use and performance. Reviewers have found that the trigger feels slightly heavier than advertised on Glock’s website as they list the breakpoint at 5.5lbs, but it is realistically 8.5lbs. This makes it heavy for a striker fired pistol, but it is still better than double action trigger commonly found on other sidearms.

The pistol has satisfied many professionals with its reliability using standard .380 rounds such as Remington UMC 95 grain FMJ but came into issues when using specialty ammo that was either heavier or lighter than the standard round. Bullets such as Freedom Munitions 100 and 100 gr. Buffalo Bore +P caused the lock the slide back with rounds still in the magazine and lighter rounds such as the Barnes XPD don’t seem to cycle through the gun at all. However, reviewers say that the finicky nature shouldn’t be a problem to someone using standard rounds.

People found the grip of the pistol to be comfortable, especially for a pistol of its size. It is easily concealable and even though it is larger than some of its .38 counterparts, it more than makes up for this with its lower recoil, making it the ideal handgun at its price point for someone with small or average sized hands. Those who find their pinky slipping off can easily fix the issue with Pearce grip extensions installed on the Glock factory magazines.

Reviewers claim the Glock 42 may be one of the easiest to use ultra-concealable pistols because it has an easy-to-use safety and lacks the long, heavy double action trigger. Whether you are familiar with Glock’s, their consistency and simplicity are easy to appreciate for any gun user.

In terms of customization, the gun has been out for several years and is by a popular manufacturer, so there are plenty of ways to customize your weapon, from different looks and shades to holsters and carriers. Any gun shops should be able to supply anything you need for your G42 to become uniquely yours. Because it’s a Glock, the pistol comes with the immediate credibility associated with all well-known manufacturers.

The Glock 42 is the perfect gun for someone who has enough shooting experience to carry a gun competently and safely, but who probably won’t make it out to the range often. It’s also easy to share when either teaching a rookie how to shoot or with an experienced shooter as it is simple and easy to use and feels good to shoot. Those unfamiliar with its mechanics will be pleasantly surprised at its low recoil and admire its consistent accuracy after the first shot.

Even though it is not the 9mm that many gun enthusiasts wanted upon release, this .38 impressed the community as one of the best ultra-concealable handguns for its cost and one of the easiest to shoot. If this sounds like the gun for you, go to https://us.glock.com/Products/G42 today for more information and to find a seller near you.