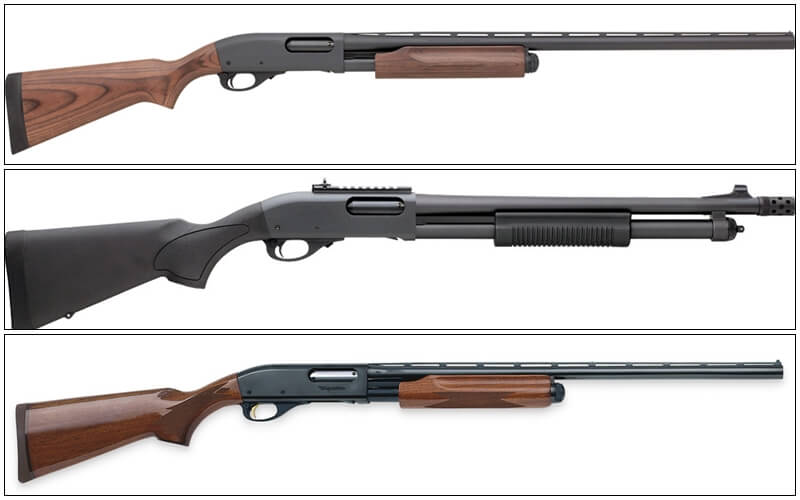 Statistics should be enough to attest to the Remington’s value: in 2009, on April 13th, Remington sold its 10,000,000th 870 shotgun. Surely such enthusiasm couldn’t have been misplaced. Gun owners the world over respect the 870 for its versatility, reliability and accuracy. But more than anything, the Remington 870 is known to be durable, dependable and affordable. The Remington 870 is simply the most successful pump action shotgun ever produced.

The 870 has been deemed by some an “American Icon”. In part because of the fact that it has earned its place in the hands of police officers, US Coast Guard officers, and hunters alike (especially turkey and large-game hunters). Its success has also made this hot-selling shotgun become the model for other shotguns produced after it. In fact, the Mossberg 500, one of the Remington 870’s fiercest competitors was modeled after this American Icon. So let’s take a better look at what makes the Remington 870 the one shotgun that people simply flock to.

Though we’ve touched this particular issue before, there’s no overstating the looks, handling, reliability and balance that you get with a Remington 870. More importantly. This particular shotgun is extremely versatile. Make no mistake, everyone, their mother and their grandmother makes accessories for the 870 (granted, that’s to be expected with such a popular shotgun). You’ll most likely never have the time to try out the plethora of chokes, barrel lengths, configurations, and barrels available at the moment.

The Remington 870 is exceptionally beautiful, regardless of whether we’re talking about the 870 express, tactical or Wingmaster designs. I personally have a sweet spot for the high polish that the Wingmaster boasts, though it’s not only design that makes this particular shotgun worth your while.

Right off the bat, let’s just underline the fact that, unlike other pump-action shotguns, the Remington 870 uses a solid steel receiver rather than an alloy receiver. While this leads to increased durability, it also makes the pump move really smooth. However, it’s the 870’s stock that makes this lightweight shotgun so worthwhile.

The design of this stock feels extremely comfortable to the great majority of shooters. Unlike other shotguns, designed for the average shooter, the Remington 870 stock has hit the proverbial jackpot when it comes to its fit and feel. Instead of going crazy over critical dimensions (such as pistol grip shape, stock width and even the transition from the pistol grip to the receiver), the 870 has intuitively found the perfect balance between stock measurements and its translation into an easy-to-grip shotgun. Many models include a rubber recoil absorbing pad (and this detail is particularly important), a great addition to a shotgun that could be considered feather light (weighing only a bit over seven pounds).

The Remington 870 also features a decently sized comb located at the top of its stock, so that the shooter can have a reliable cheek rest when aiming. The rest of the shotgun features a minimalist design, and while I believe that less is more, some may have desired a more intricate design.

When compared to its competition, polls have deemed the Mossberg 500 superior (check out this survey). But despite the apparent consensus, my preference still lies with the Remington 870. This shotgun feels solid and well-put together, it looks impeccable and boasts a beautiful finish. Aside from this, the 870 holds its own when put alongside any other pump-action gun ever built.

You can be sure that the 870 will put out round after round of birdshots, slugs and buckshots without any problem. You will rarely see an 870 malfunctioning, ejecting poorly or hanging up.

Of course, there isn’t such a thing as a flawless shotgun (or if there is, I haven’t seen one yet). So the Remington 870 has its flaws. One of the most noteworthy is the fact that short stroking may jam your action. Gunsmiths were aware of this issue so they would cut a small opening on the shell riser so that the shooter would be able to un-jam the gun’s action with the help of a key. Of course, Remington engineers caught on and corrected this issue by adding a clever “tab” inside the shotgun’s shell riser, so that the jammed shell could find a bit of room. All you have to do now is to cycle the action again and the shell becomes loose.

There has been noteworthy outcry since 2005’s acquisition from the Freedom Group. Numerous internet reviews highlight the problems that the 870 currently has with its dull matte, non-glare finish. In high-humidity areas, the 870 has become somewhat of a “rust magnet”, though with proper cleaning and oiling, you should have no issues whatsoever.

Of course, it’s hard to test the levels of wear and tear that your shotgun would suffer after years of use. This particular test tested the Remington 870 against the Mossberg 500 under somewhat peculiar circumstances. The shotguns were dropped, run over, dragged at 5 mph and turned into make-believe paddles. Even so, the Remington 870 survived. In fact, not only did it survive, but it also suffered less visible damages when dragged on a gravel road and survived crash landings.

One word of caution though, a shotgun as successful as this one surely attracts heaps of unwanted attention. That’s why, after the patent laws protecting the original 870 design expired, numerous Chinese companies began producing unlicensed copies of this shotgun. There are two notable differences: they feature 18.5 inch, 12.5 inch or 14 inch barrels and, of course, can’t hold a handle to the unbeatable Remington 870.

Opinions may differ, however, the Remington 870 is unarguably one of the best shotguns that can be acquired for under $500.