Most Powerful Handgun in the World – A Shot at the Top 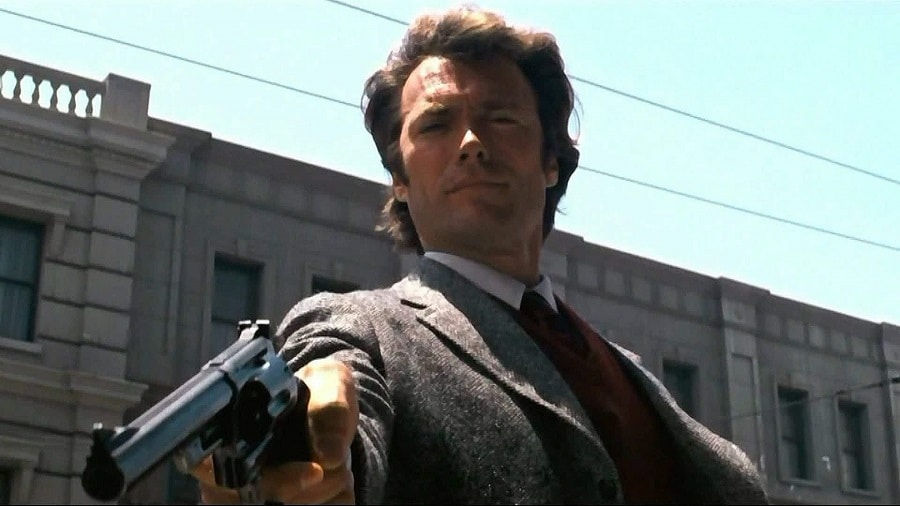 To keep and bear arms is the right to defend yourself, they say. These handguns reinforce that principle. However, they are not reduced in design only to incapacitate or kill. They do so with impressive force, one to be reckoned with. It’s all about breaking records. So what is the most powerful handgun in the world?

To that extent, we created a bulletproof list of top ten most powerful handguns. Get locked and loaded, and stick to the end of this coronation ceremony.

What is the most powerful handgun out there?

‘A man’s got to know his limitations’, but this gun does not. A hand cannon in the right hands, the .44 Remington Magnum first hit the stage in the 1970s. It was launched into instant fame by Dirty Harry, the vigilante cop played by Clint Eastwood.

In the movie series, it was the only partner to keep up the pace with rule-bender Inspector Callahan in scrubbing the streets clean of criminals. The most powerful handgun out there, the Magnum. A bullet-spitting monster whose accompanying equipment, the shoulder slings and bipods only attest to its power.

This gun fires big and fast enough bullets. It would be better suited for game up to elk and even elephant size than proper police weaponry. For some, simple ownership of this large caliber handgun is enough. Particularly since shooting it may prove a little bit of a strain on the hands. Unless, of course, your name is Dirty Harry. 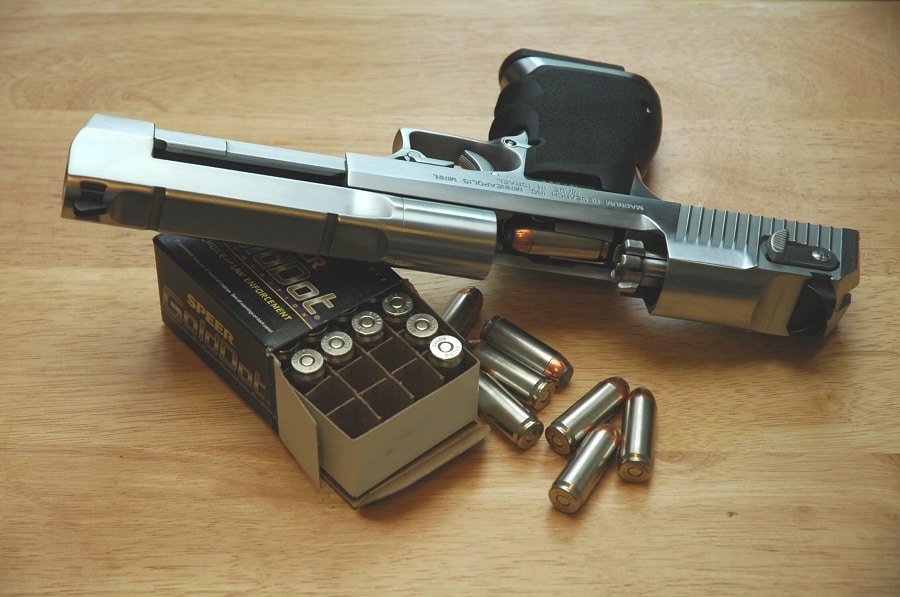 It’s known for chambering the largest cartridge of any gas-operated, semi-automatic handgun. The Desert Eagle is about as powerful as a self-loading pistol can get.

This most powerful handgun holds a unique design with a huge muzzle and a triangular barrel. It can fire up to 7 rounds of .50 A.E ammunition. Furthermore, the bullet exit is protected from too much wear and tear by a special technique used in the bore.

With great size comes high recoil. As such, the Desert Eagle is said to be much better suited for the outdoor than close-range shooting or home defense setting. Developed by Magnum Research and refined by Israeli Military Industries which also produced the similar Jericho 941, or Baby Eagle, the handgun blasted the market in the 1980s. The echoes ring to this day.

It was developed by Magnum Research and refined by Israeli Military Industries. They also were the ones behind the similar Jericho 941, or Baby Eagle. The Magnum handgun blasted the market in the 1980s. The echoes are heard to this day. 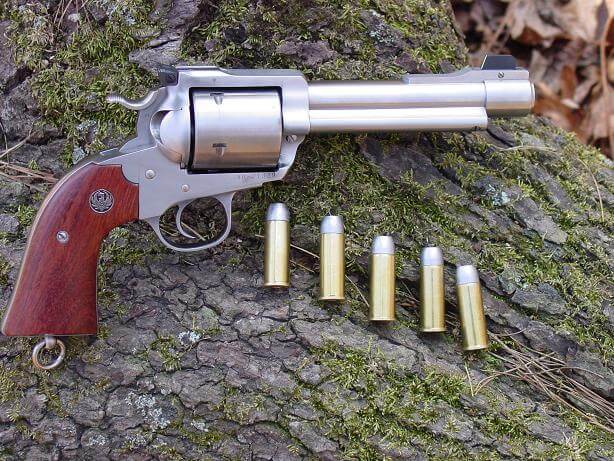 Wyoming-based gunsmith John Linebaugh had been searching all his life for the most powerful cartridge. He first took his shot at converting Ruger and Seville sixguns into five-shooters. While that proved successful, it was the .500 Linebaugh that hit the target.

40 years later, Linebaugh’s signature gun is still a big shot. It’s now claiming the title for one of the most powerful handgun cartridges, pushing heavy bullets at tremendous speed. The firearm can launch a 29g bullet at a velocity of 400 m/s while generating 2.240J of energy.

Initially, the design was for a hunting cartridge. However, you can also use the .500 Linebaugh as a backup arm in the wilderness of Alaska, where large bears roam. It still remains the ultimate portable weaponry easily packable. 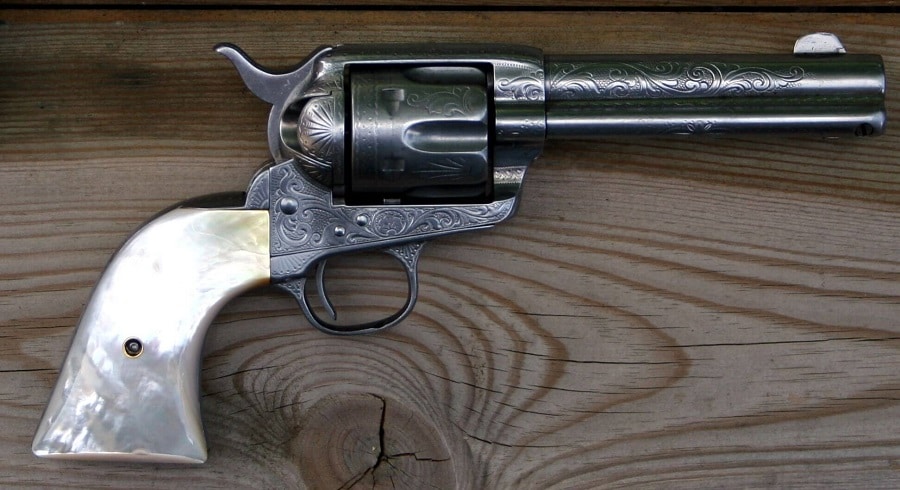 Meet the ‘Peacemaker’, ‘The Gun that Won the West’, the ‘Great Equalizer’, the Colt SAAA. No other gun bears as many names and as much history as this famous piece of Americana. Here’s the rugged and robust single-action Colt Army Revolver.

A requisition of the US Army by Samuel Colt, it became standard military service revolver until 1892. The Colt SAA has remained faithful to its original face. The solid frame, the case hardened finish, and the seven and a half barrel make it a polished beauty of the 19th century.

The manufacturer has interrupted production twice, but the Colt kept coming hard on the scene due to popular demand. It used to be a favorite among lawmen and outlaws alike. However, it’s since switched hands to cinema cowboys, re-enactors, and collectors. The word on the street is that God created all men, but Samuel Colt made them equal.

It’s similar in loading and loosely inspired by the previously mentioned Colt Single Action cowboy gun. The Zeliska is one of the most powerful handguns out there, hurling a muzzle energy of 7.591-foot pounds in a display of brutal force.

Not only that, but this handgun is a contender for the heavyweight category as well. It weighs an outstanding 6.001 kilograms/ 13.230 pounds. The cylinder alone tips the scales at more than 4 pounds and measures 55 centimeters/ 22in in length.

Produced by Pfeifer firearms, this Austrian revolver looms so big, you might think it’s a Hollywood prop. Even more so with such added features as a hammer plated in gold, and cylinder pivot and action. Each .600 Nitro Express bullet costs nearly $40. 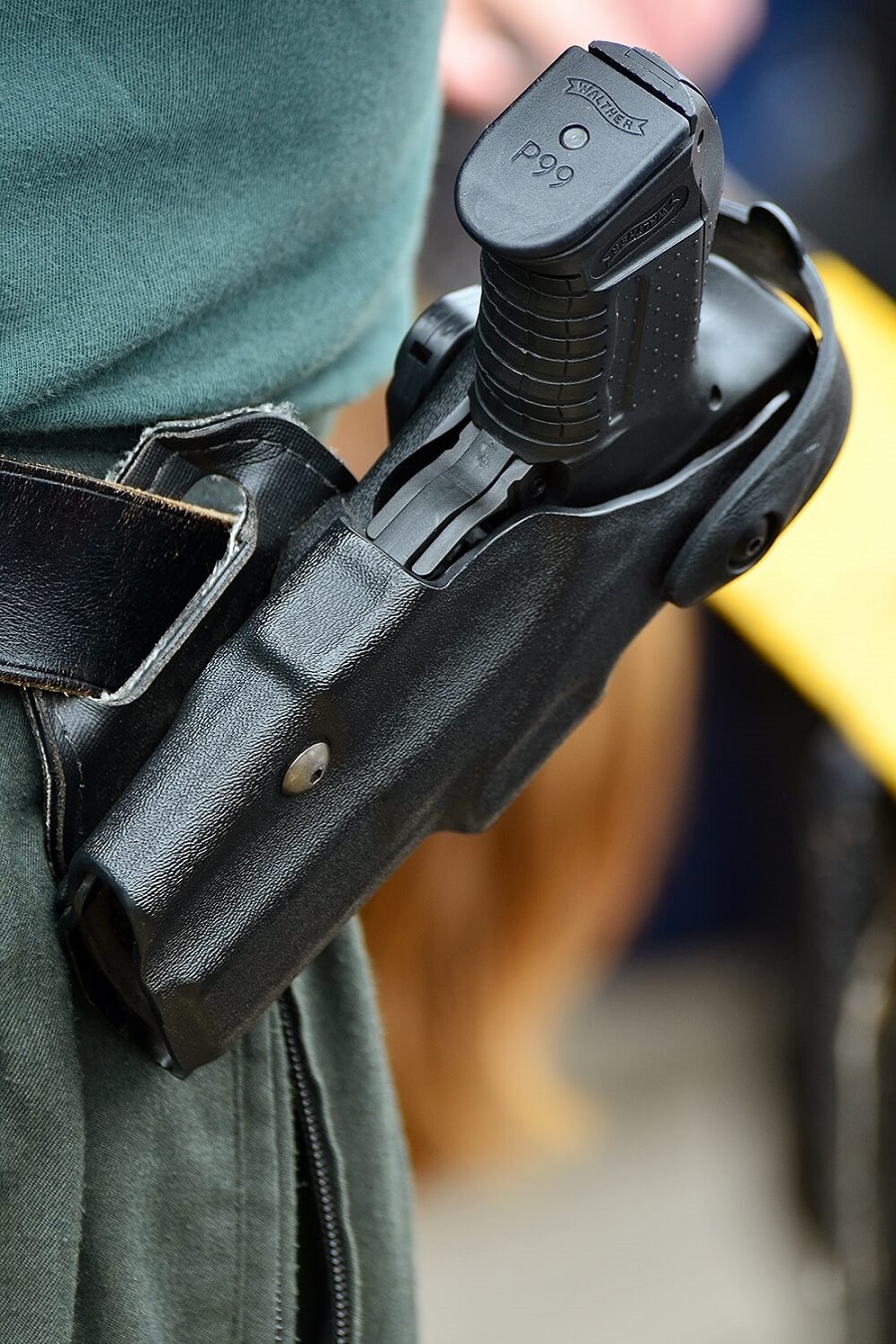 The Polizeipistole series of double action semi-automatic pistols was first developed by German arms manufacturer Walther for the European police force in the 1930s. It features a cool title and a stylishly simple design.

Safety features like the automatic hammer block or the indicator pointing to a loaded chamber were innovations at the time, and sparked worldwide inspiration, prompting gun manufacturers to unload an assault of legendary firearms like the Hungarian FEG PA-63, the Soviet Makarov, or the Argentinian Bersa thunder 380.

This handgun’s reliability and chameleonic design are its other much-appreciated features, and come packaged with an exposed hammer, a fixed barrel and a single column magazine. It’s certainly a contender for the title of most powerful handgun.

While the recoil is high, the decoder assists in the safety drop, after you depress the hammer, so the Walther pistols are not only one of the most powerful handguns in the world, they’re also a universal match for any hand size out there. 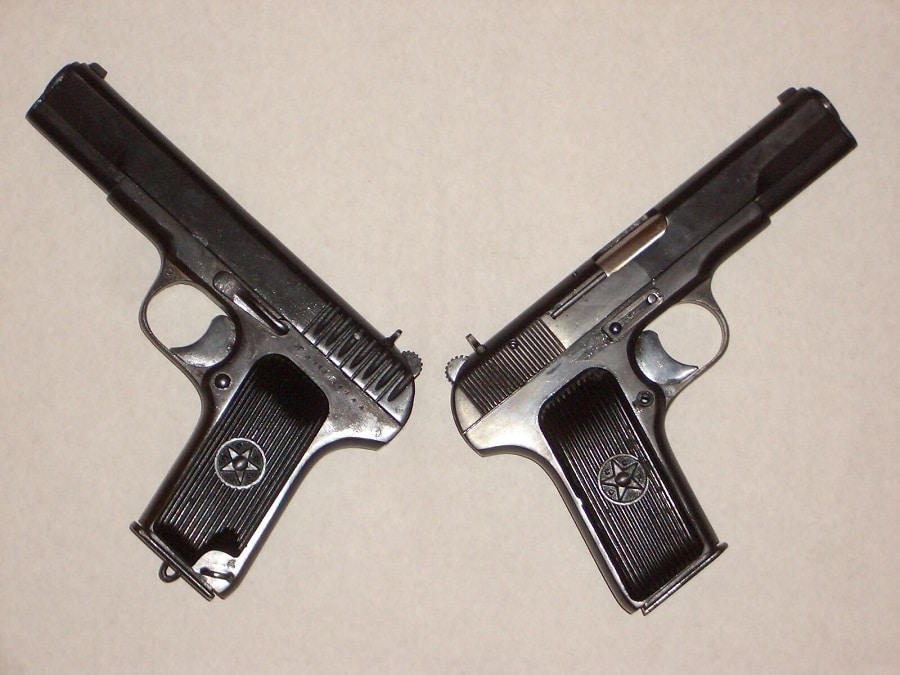 If the Walther is Gestapo’s weapon of choice, the Tokarev was designed in the millions to arm the communist secret police, the European countries on the other side of the block and other Soviet satellite states like Pakistan and China.

This handgun is the ultimate collectible, but since it was mass produced, it now sells on the surplus market at a price that is more than affordable.

The bottleneck cartridge, which in fact is an upgraded Russian version of the 7.63x25mm Mauser, is less prone to jamming and has greater penetration. In tests, it proved to be armor-piercing and defeated lighter ballistic vests with ease, while also denting the sturdier Kevlar helmets.

Although somewhat of a rugged relic, the Tokarev still remains a reliable pistol and one of the most powerful handguns in the world. 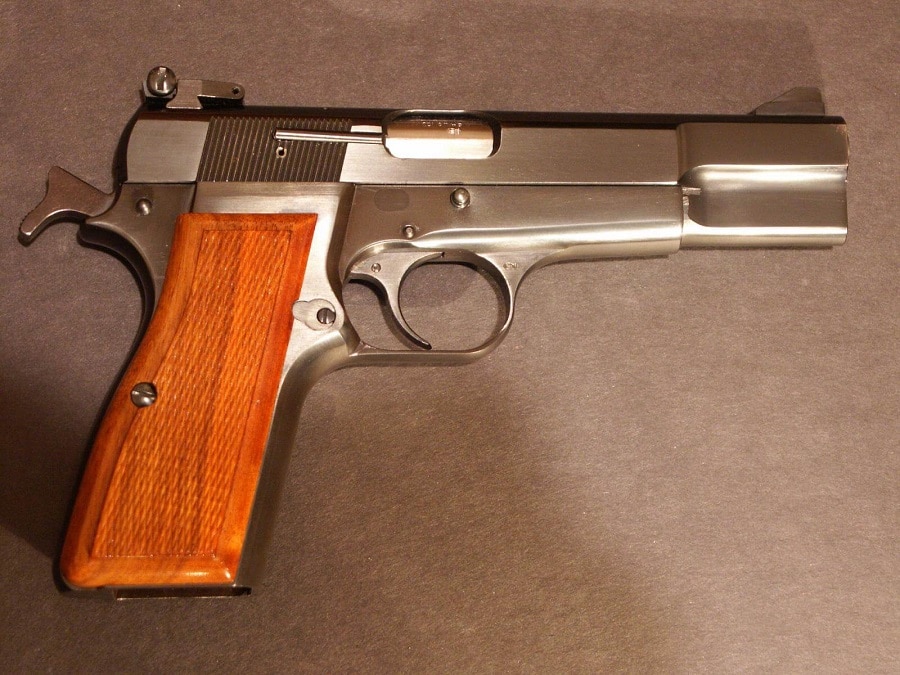 This state of the art handgun was commissioned to American firearms inventor John Browning by a sidearm service for The French Military, the Grande Puissance. Translated to ‘High Power’, the name stuck to the gun. It was, in fact, the last Browning designed.

Among the requirements, the French asked for the arm to be compact, simple to re-assemble, capable of hitting a target at 50 meters, and endowed with a positive safety and magazine capacity of at least 10 rounds.

This pretty much describes the Browning Hi-Power Pistol, certainly the most powerful handgun to fall in French hands. The name also gives testimony to the present 13-round magazine capacity. At the time of its conception, it was unrivaled and introduced in more than 50 countries.

When the Belgians bought the patent, they unimaginatively renamed it P-35. 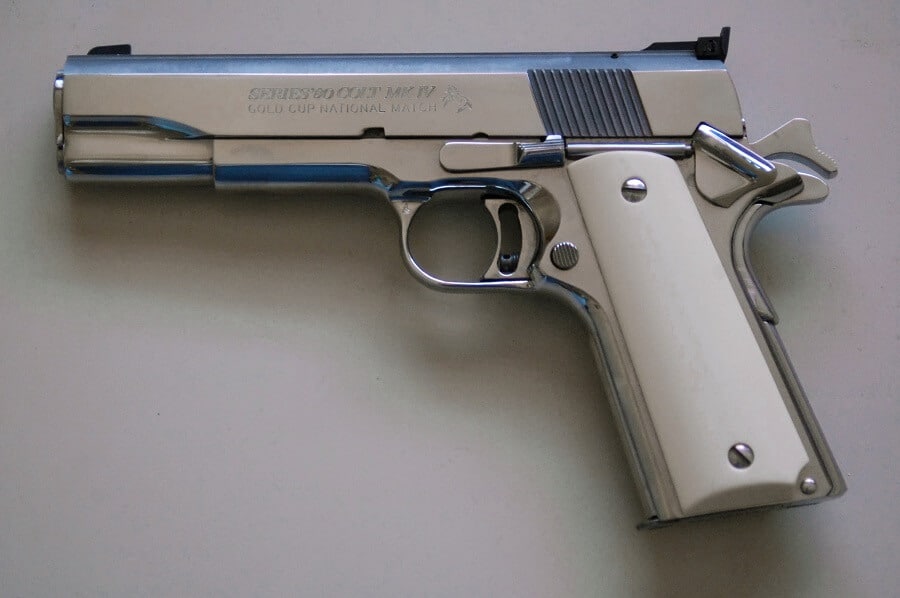 Another Browning design, this 1911 pistol is the sweetheart of handguns, as much as a pistol can ever be loved.

Going by the affectionate name ‘The Yankee Fist’, this single-action, semi-automatic, recoil operated pistol served a full 75 years in the line of fire as the standard-issue sidearm for the United States Armed Forces.

Not only did the M1911 shoot its way to the top of the most steel-solid and powerful handguns in the world, but it was among the first to introduce the short recoil principle in the pre-WW1 USA. 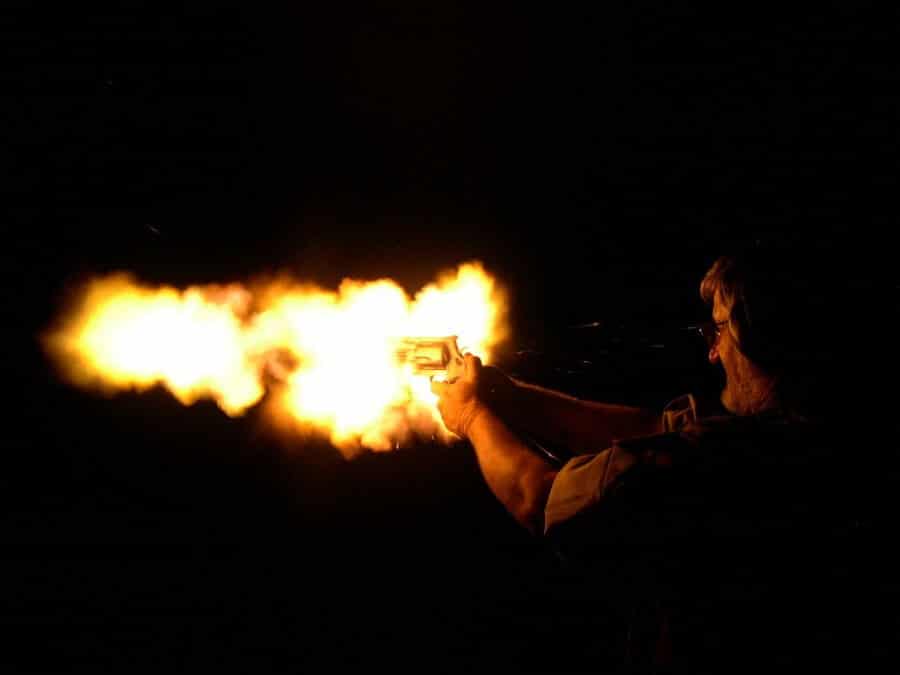 Some of the most powerful handguns in the world shoot above and beyond the requirements, and the Smith & Wesson .500 is there to claim the throne.

If what you want is a display of sheer force and brutal power, and you’re still not convinced by our previous nine most powerful handguns, this .50-caliber has a deadly punch to do the trick.

These are not your average firearms. They’re the most powerful handguns in the world, and should only be reserved for situations in which you either have to fight an apocalypse of zombies, defend yourself from the attack of a mad Revenant-epic grizzly bear or take down alien aircraft.