M1 Garand Use And Care Guide 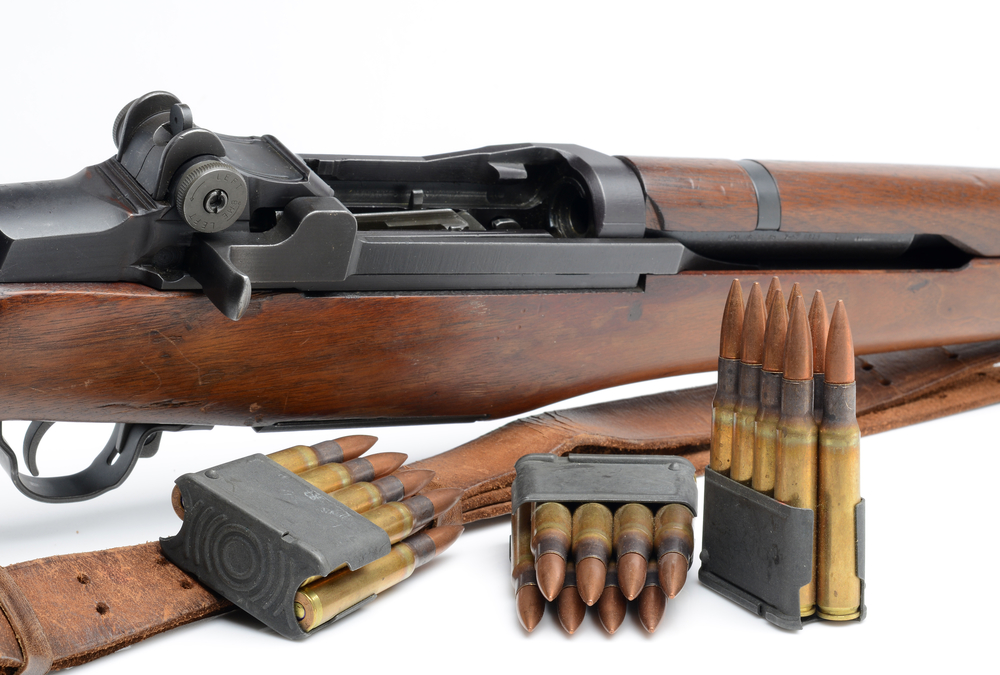 It's hard to overestimate the emotional connection shooters have with the excellent M1 Garand rifle. General George S. Patton described the Garand ridle in a letter to the Army's Chief of Ordnance in 1945 as "the greatest battle implement ever devised." As the world's first battle-ready, semi-automatic rifle, it was used by the US Armed Services during World War II and was so effective it spurred the development of similar weapons by both Allied and Axis nations.

The United States military has since moved on and the M4 carbine rifle is the weapon you are most likely to see in the hands of today's rifleman. Yet the M1 still sees regular use as a ceremonial rifle and is popular with collectors, marksmen, and hunters. If you are lucky enough to own one, here is what you need to know about the history, functionality, and care of this revered weapon.

History Of The M1 Garand

The Designer and the Competition 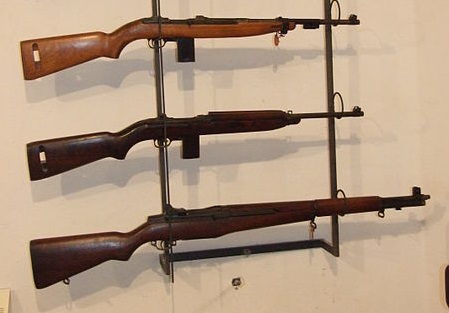 The rifle takes its name from its inventor, John Garand. Born in Canada, Garand immigrated to the United States as a child and became a machinist at a textile mill in Jewett City, Connecticut. When the United States Army asked for lightweight machine gun designs in 1917, Garand submitted a design. His design went through many iterations and trials against similar models submitted by other manufacturers. At one point, the .30 M1 Garand design was even dropped.

The Army considered designs offered up by Colt-Browning, Thompson, Pederson, Garand, and others, holding multiple field tests with infantry and cavalry. The field of contenders was eventually narrowed down to the T1 Pederson rifle and the .276 T3E2 Garand; the .276 Garand came out the clear winner.

General Douglas MacArthur had one problem with this choice: rifle caliber. The Army had plenty of .30 ammunition and no desire to let this go to waste. The Secretary of War ordered the Garand .276 model scrapped and a .30 Garand model to be developed and perfected instead. This was done and by the middle of 1937, the rifle was in full production.

The M1 Garand went through many design adjustments over the next few years, but from the start it was a revolutionary firearm. At the opening of World War II, every army was using a manual bolt-action rifle. The new M1 could fire between 40 and 50 rounds a minute, outclassing anything else on the field. 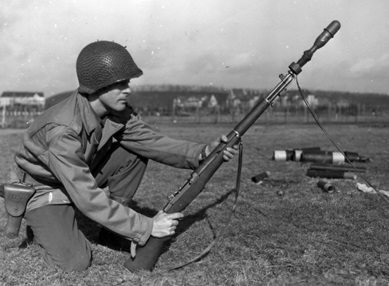 After World War II, the rifle saw continued service in the Korean conflict. The M1C and M1D sniper rifle models were popular with snipers, who found themselves regularly able to score kills at, for the time, an extremely impressive 600 yards. A few M1 Garands saw use in Vietnam, particularly as sniper rifles, though by then the M14 had become standard issue.

All models of the M1 finally ended their official active-duty career with the United States Army by 1965. The Army Reserve, Navy, and Army National Guard continued to use the weapon well into the 1970s. Because Garand rifles are so durable and well-made, there are plenty of them still around. They are regularly used in honor guards, in the Reserve Officer Training Corps, and by hunters and marksmen worldwide. They also remain popular among collectors and even Arctic trekkers.

How To Load And Shoot

The M1 Garand is a joy to shoot, especially when handled by someone familiar with the rifle's design. It is important to note, however, that several different manufacturers produced models of the M1 and any individual rifle will have a unique history of use and care. The shooting experience will depend on the quality of the barrel in question and the state of the rifle itself. 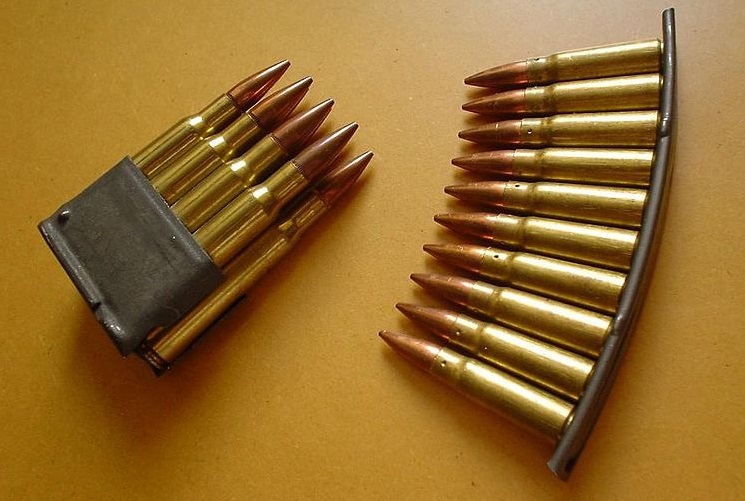 The M1 Garands operate on an older gas piston system, so using modern .30-06 ammo can harm the piston system. These rifles originally used 150-grain FMH M2 ball ammunition with muzzle velocities of 2800 feet per second. The modern Federal American Eagle .30-06, with a velocity of 2740 fps, is a solid choice for enjoying the rifle as it was intended. If you can find surplus ammunition from the rifle's active-duty era, so much the better.

The firearm uses an en-bloc clip that holds eight cartridges. To load the rifle, pull the operating handle firmly back as far as it will go. Then allow it to move forward slowly until the latch catches. Push on it to make sure the latch is secure and then engage the safety.

With the butt of the rifle against the thigh and the muzzle pointed in a safe direction, press the clip into place with the thumb. The clip will function whether the right column or the left column of cartridges are loaded higher, and this will depend on shooter preference. The clip has two small dimples on opposing corners. These dimples hold the clip in place and allow it to be inserted in either direction.

Loading the clip has been known to jar the operating rod loose. If that happens, the bolt can slam forward and cause the dreaded "M1 Thumb." To avoid this, always load with the thumb placed above the clip, the palm along the right side of the stock, and the heel of the hand blocking the handle of the operating rod. The instant the clip is loaded, move the thumb quickly out of the way. The operating rod will normally chamber the round at this point, but it may be necessary to manually strike the operating rod in order to fully lock the bolt.

The M1 Garand comes with a two-stage trigger, and the weight of the rifle softens the recoil significantly. For those just starting out, sitting or lying positions, rather than standing, are most useful for getting to know the rifle and getting comfortable with shooting it. The rifle ejects empty cartridges automatically. When the eight cartridges are spent, the clip will eject with the characteristic M1 ping.

How To Clean The Rifle

The M1 Garand should be cleaned only after it has been carefully unloaded and the safety engaged. There are a number of .30 caliber cleaning kits available, and any of them will do a fine job if you carefully follow the included instructions.

For best results, choose a cleaning kit that has a cable cleaning system rather than a cleaning rod. Use the patches and cleaning tips that came with your cleaning kits. Add a few drops of a good solvent and insert the patch into the barrel from the chamber. Slowly pull it through the muzzle, rotating as you pull to clean the chamber.

Repeat this process several times and then follow the patches with a bore brush. A nylon bore brush will not degrade like a brass one will if you are using a quality solvent. Once you have finished cleaning, draw clean, wet patches through the muzzle until they come out with no discoloration. Add gun oil to the muzzle with another patch and the process is finished.

It is not necessary to always disassemble the rifle to clean it and doing so frequently will eventually make your rifle less accurate. If you must disassemble the rifle, start by moving the bolt forward carefully. Then adjust the rear sight to the lowest position, turn the rifle over, and pull the trigger guard up and towards the rear of the rifle. This will remove the trigger assembly.

Next, place the barrel and receiver sights down and, while holding the receiver, pull the follower rod out towards the muzzle. Let the operating rod slowly extend. Remove the rod and operating rod spring, but do not separate the two.

Field strip the rifle once a year or if it will not be used for an extended period. Use this opportunity to completely remove old grease and thoroughly lubricate the gun with fresh lubricant and grease.

Owning an M1 Garand means many things. It means owning a piece of history. It means owning one of the finest designed firearms ever created. It means owning an accurate and deadly weapon. If you are the fortunate owner of one of these excellent machines, give it the honor that its history, function, and design all deserve. Take good care of it, but use it, too! You'll enjoy every minute.