An amateur gun-owner searching for a sturdy but cheap handgun will definitely want to give the Ruger P95 a look. While it’s no Magnum, this pistol is sure to raise a few eyebrows and prove its worthiness as a premium firearm.

The following review will show just how reliable this piece of weaponry is, what its features are, and how it compares against other handguns in its price range. Lastly, we will be giving our honest opinion of the looks and usefulness of this gun in different possible scenarios.

Before we get on to the actual review, it should be noted that the Ruger P95 is a weapon that is no longer in circulation. Someone wanting to buy a brand new one will have difficulties finding a Ruger P95 for sale that hasn’t been used. The P95 is a model that has been discontinued, as Ruger announced back in October 2013 that they will no longer be producing the P95. However, if someone wants to buy one it’s pretty easy to find either online or in gun stores all over the US.

The Ruger P95 specs feature a classic 9mm design, as you can see from the picture above. It fires a 9mm bullet and has a total Ruger P95 magazine capacity of 15 rounds. It’s mainly made of polymer, with steel inlays on the sides. The polymer gives it a nice, light feel while the steel adds a dash of style to an otherwise bland handgun. Its overall weight clocks in at 27 oz. while the barrel length is 3.9”.

Born in 1996, this beautiful black bullet blazer dropped nearly a half-inch off the barrels of its predecessors. It also lost weight, being the first of its kind to feature a polymer body (something fairly new for cheap guns at the time). The Ruger P95 9mm can be used by both righties and lefties since it also features two manual decocking levers: a bigger one on the left, and a smaller one on the right.

One disadvantage of the P95 is that its decocking levers are difficult to use on account of the safety mechanism. However, if someone is willing to go through a thorough search process, there are some Ruger P95 handguns that have no safety. Still, finding one could lead to a bigger problem than before: only very few have been produced and they are likely to not be for sale.

The biggest advantage, on the other hand, that the Ruger P95 has over other similar handguns is that it can load just about any type of 9mm cartridge of ammo. This puts it way above similar pistols such as the Glock 19.

As a DA/SA, this gun has absolutely no problems in its firing mechanisms. The action is smooth, the trigger is easy to pull, and the reset works like a dream. Do we recommend this gun? Of course. But there are also some bad sides to it.

The sights of the Ruger P95 are small. In fact, this may be the single biggest problem with this firearm. While not many people actually buy a handgun based on how large its sight is, the fact that the Ruger P95 has a small one certainly isn’t to its advantage. When one looks down the scope, the sight at the other end is barely noticeable. 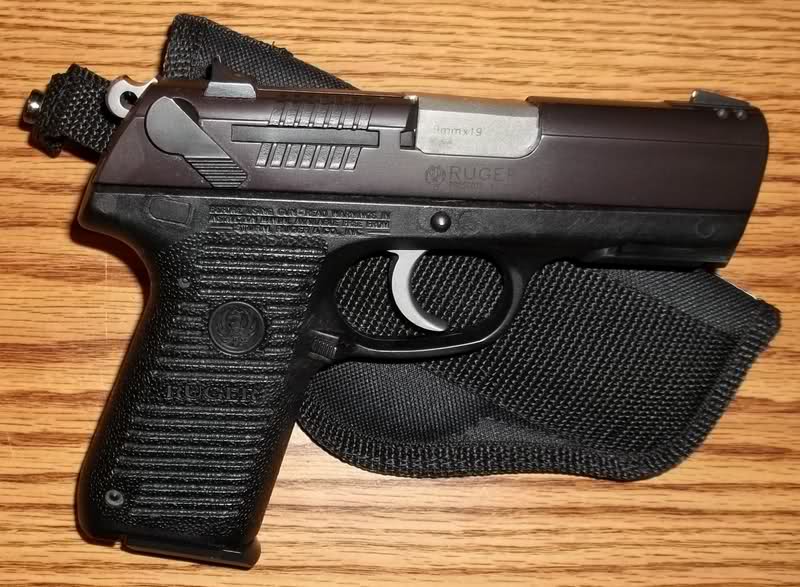 One can’t really match up this gun against anything more expensive. In terms of accuracy, specs, and comfort, a Glock 19 will be a much better way to spend the money. But there is a big exception here: exactly how much money someone will be spending on it. The P95 is good because it’s reliable while maintaining a low price-tag.

Ruger P95 Price: For anywhere in between $250 and $300, it can be bought second-hand, or found new (if, again, one is willing to search for it a little longer). For someone with not a lot of cash on his or her hands, the P95 is a good choice because for the extra money you can even purchase bullets to last a lifetime.

So does it win against the Glock 19? The results are… inconclusive. What we can say is that it can perform just as well sometimes, while buyers will be spending less on it.

The Ruger P95 is built for the toughness of everyday wear-and-tear. While it isn’t as easily conceivable as other handguns, it manages to be a good pistol to keep around the house for defense purposes. It’s also a good gun to carry in a truck, or in a car. Testimony to this stands the US Army who awhile back ordered some for their tankers to carry as backup just in case someone broke into their vehicles.

So what is the one word that can describe the Ruger P95? Diligence.